So many warm and happy greetings from Cycle Farm! We’ve been sending out weekly farm updates via emails to our farm share members  for a month now and have realized that without our routine springtime farm community events, there are many in our broader community of farm friends that we haven’t had a chance to catch up with these days and we’re missing time with you all. This is a collection of snapshots (mostly annotated) from the farm these past couple of weeks, highlights from the most recent week’s share member newsletter, and a brief update as to where we are in the season. We are sending this out with love and hope it finds you doing well, keeping busy, and eating something seasonal and delicious, wherever you happen to be. Currently on the farm we have three lambs, a young soon-to-be laying flock, and a brooder full of Freedom Ranger meat birds. The lambs, Emily, Oliver, and Budbill, are just recently weaned and still exceedingly snuggly. The not-quite-yet layers treat the lambs like playground equipment. The lambs don’t seem to be thrilled about this. The brooder birds have quickly phased from cutie little peepers into their partial feathers, haggard and ragged look and whole-hearted dissident punk attitude. I think they’re staying up late listening to Rancid records, making art stencils, and compiling their angst and diy ethics into zines. They are at least pooping everywhere and scratching all the feed out of their feeders, no doubt because the feeder is an indisputable symbol of authoritarianism. Last week we put the lambs to in graze an area that we had seeded last fall with a rye and vetch cover crop. They took to the task without hesitation, the chickens followed suit. A lot of full crops and contented ruminations. The photos below show the rye/vetch field, in the lower photo: on the left is what they’ve grazed down in two days, on the right is where we’re just about to move them. 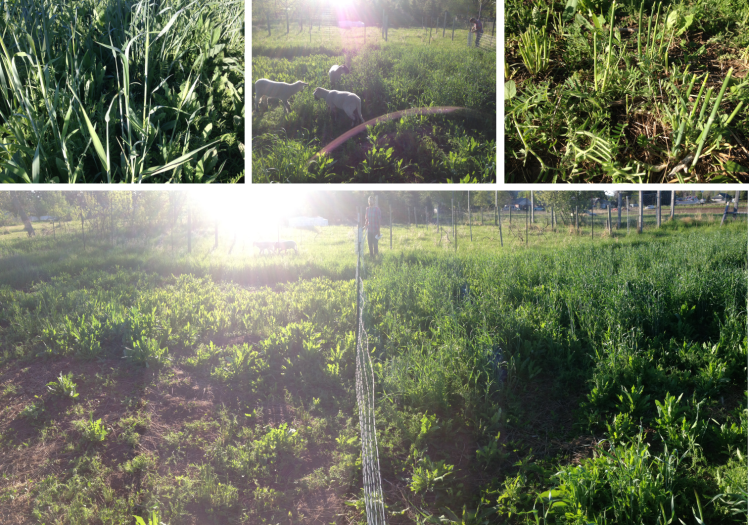 The field rows are filling in. It seems as though most of our time is being spent hauling stuff: carts of straw mulch, wheel barrows of compost, buckets of weeds, buckets of grain for chickens, flats of young, tender green plants, and the live trap with BunBuns and then, later, Mrs. Bun-Buns. Some things look awesome, some – not so hot. We’ve had trouble with some direct seeded crops (mostly due to flea beetles), and accepting of this, we’ve transplanted out starts from the greenhouse in their stead – that is to say we’re bummed about the spring turnips that didn’t even really have a chance to set true leaves, but the rainbow Swiss chard transplants we plunked down in the bed instead look great. We have a couple self-inflicted weed issues that have been and will take time over the course of the summer – a trailer load of oat straw that we’re using to mulch beds is rich in oat seed, which means now all our vegetable beds have a lush oat cover crop coming up, and after making a few batches of soil block mix with vermicompost, we discovered that last year we hid a butt tonne of flowering stinging nettle in the worm bin. On the plus side, stinging nettle appears to be great at increasing circulation and easing soreness in tired, achy hands.The snap and snow peas are climbing up up UP. The onions look great. Jeremy’s hands have completed their annual transition to 80-grit sandpaper.

Last week, Jeremy and his father, David, finished up a construction project in the pack shed.  We now have a big, empty, sparkly new wall. This puts us another step toward having the packshed all set up and functioning super smooth AND gives us an excellent location for art – we are accepting any and all mural ideas.  (fyi octopus is off the list, we already have the world’s most amazing octopus). Two observations regarding wearing masks during construction work, an advantage and a disadvantage: the mask blocks unpleasant dust/mold/junk associated with working on an old building however it’s mighty inconvenient for people who are used to holding nails/screws in their mouth as they work.

Last week we also sprayed Biodynamic preparation 500, this is our ninth season with preps on the farm.  Spraying 500 always seems to happen when our to-do list is over the top and we are feeling behind despite being in go-go-go mode. And this requires us to sit and focus, to pull our attentions and intentions together; this practice fosters observation, humility, and patience. It was a good opportunity to reflect and meditate on the farm with a special focus on all these leafy green solar panels collecting energy from the sun, exuding sugars into the soil, and feeding our soil microbes and diversity of life around us, and to help us grow good, healthy food.

In short, things around here are busy busy and beautiful, and we’re feeling especially grateful for all of it, even the 500 billion baby nettles in our soil blocks.

Oh yes! AND we’d like to share a collection of things we’ve found of interest and delight these past couple weeks…

One thought on “a May(hem) montage”