A couple weeks ago, we spread out a flower seed mix including a native wild flower mix, bee balms, phacelia, borage, marigold, sunflowers, a cocktail of every good thing. Cosmic chaos. The seeds were mixed with soil and then broadcasted through the orchard and the insectary, mainly.

So we tossed seed all over and then, as if on cue, it started raining. We got about 5” over the course of five days earlier last week. Spearfish creek reached 700 cfs. Heavenly. The rain has felt great. The soil is sucking it up. Transplanting is easy. The weeds are on full blast – but easy pulling. And it gave us a good, occasional excuse to duck inside and process some greens into pesto (somewhat non-traditional: radish greens, sunflower seed, Parmesan, olive oil and much much garlic).

Planting and transplanting. In the rain. With friends. Quite nearly so dreamy as a .. bouquet of unicorns.

The birds have been occupied conducting studies in surface hydrology. Or otherwise passing the slow days making wishes on dandelion poof balls and eating their fill of wiggly things.

Our barley experiment isn’t doing so hot. The intent was to get a strong crop of barley growing that would out compete the bindweed. The barley would then be threshed and laid back out as mulch in time to plug in sweet potato slips. Instead, the Creeping Jenny is growing taller now than the barley. We’ll see how this progresses.

Here are just a few more images from the farm these days. Marcus, chief hop wrangler, helping with trellising; peas; and garlic; the field; and sequestering carbon. 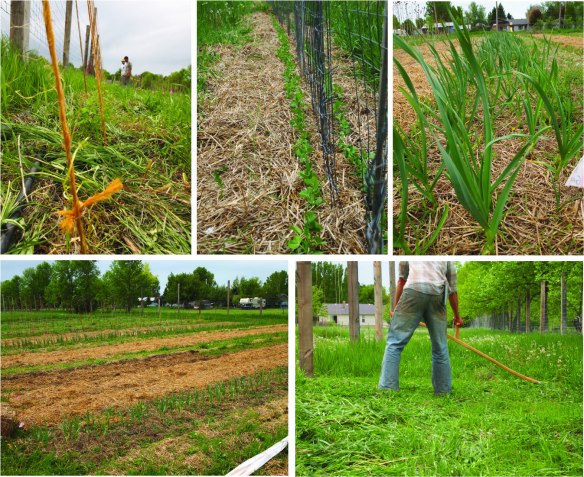 Lolita’s hive is doing alright. They are a joy to see around the farm, though certainly noticeably fewer bees around this year with only one hive (vs last year with three). They are active building comb, collecting pollen, and nectar. We’re keeping an eye on Lolita these days. Her laying pattern seems a bit off (a healthy queen will lay eggs in tight clusters of cells – an aging/off queen might lay in a more shotgun-like pattern). Also we found three new queen cups building built. Here’s a photo of the queen herself (in PLSS, she’s in the NW 1/4 of the SE 1/4 section).

And finally: Are you filling in your home garden beds? We have starts for sale! Basil, oregano, thyme, sage, broccoli, romanesco, cabbage – and MORE – give us a call.

Wishing you well, Trish and Jeremy